January book of the month! I love this book, so get reading so we can nerd out about it at the shop or on a ride!

“A double-threaded narrative proves seductive, drawing the reader into the naive but determined protagonist’s efforts to transform an unjust universe. Leckie uses…an expansionist galaxy-spinning empire [and] a protagonist on a single-minded quest for justice to transcend space-opera conventions in innovative ways. This impressive debut succeeds in making Breq a protagonist readers will invest in, and establishes Leckie as a talent to watch.”―Publishers Weekly 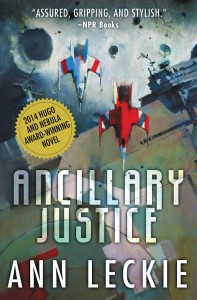 Ancillary Justice is a science fiction novel by the American writer Ann Leckie, published in 2013. It is Leckie’s debut novel and the first in her “Imperial Radch” space opera trilogy, followed by Ancillary Sword (2014) and Ancillary Mercy (2015). The novel follows Breq, the sole survivor of a starship destroyed by treachery and the vessel of that ship’s artificial consciousness, as she seeks revenge against the ruler of her civilization.
Ancillary Justice received critical praise, won the Hugo Award,[1] Nebula Award, BSFA Award, Arthur C. Clarke Award and Locus Award, and was nominated for several other science fiction awards. The cover art is by John Harris.

This entry was posted in Uncategorized. Bookmark the permalink.